A football club has dropped its new shirt sponsor – a betting company that shared adult content on its social media page – after a regional daily called for it to do so on its front page.

The Norwich Evening News launched a campaign on Wednesday aimed at getting Norwich City to disassociate itself from BK8 after the images surfaced on the betting company’s Instagram page.

The offending posts, including “images of scantily clad young women” and “inappropriate videos with sexualised connotations”, have since been removed and the firm has apologised for the content.

The club has now confirmed it has terminated its agreement with the firm after the Evening News called on City to “do the right thing” on its front page. 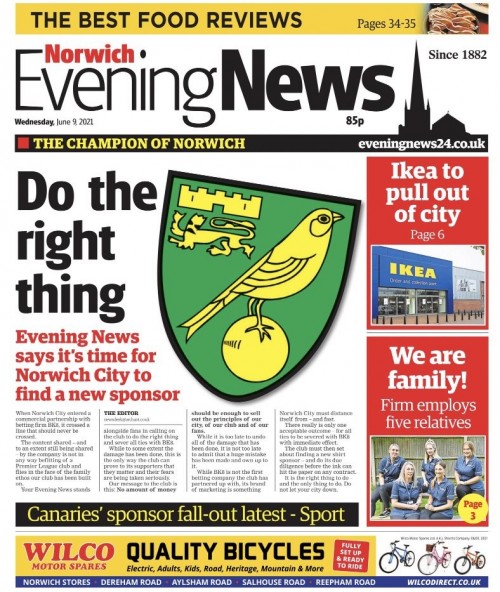 In an accompanying comment piece published on Wednesday, editor David Powles wrote: “When Norwich City entered a commercial partnership with betting firm BK8, it crossed a line that should never be crossed.

“The content shared – and to an extent still being shared – by the company is not in any way befitting of a Premier League club and flies in the face of the family ethos our club has built on.

“Your Evening News stands alongside fans in calling for the club to do the right thing and sever all ties with BK8.

“While to some extent the damage has been done, this is the only way the club can prove to its supporters that they matter and their fears are being taken seriously.

“Our message to the club is this: No amount of money should be enough to sell out the principles of our city, our club and of our fans.”

City announced the “mutual termination” of the deal with BK8 yesterday morning.

In its statement, the club apologised for any offence caused and admitted: “On this occasion, we got it wrong”.

It added: “The club understands the reaction to BK8, their affiliates and other similar brands’ ways of marketing, the values of which do not align with those of the football club.”

Welcoming the decision, David posted on Twitter: “Everyone makes mistakes, how you deal with them matters.”