Daily demands change in law on batteries after toddler’s death

A regional daily is aiming to change the law in memory of a toddler who died after putting a battery in her mouth.

Stoke-on-Trent daily The Sentinel and its Stoke-on-Trent Live sister website have launched a campaign highlighting the dangers of button batteries following the death of two-year-old Harper-Lee Fanthorpe.

Harper-Lee died in hospital in May after swallowing one of the batteries, which are no bigger than a five pence piece, that she had managed to remove from a remote control.

Now her mother Stacy-Marie Nicklin has teamed up with the Reach plc-owned titles to call for the introduction of ‘Harper-Lee’s Law’ to ensure that any items not deemed essential must not contain button batteries, and to make it law that all essential button batteries must contain a quantum coating that means they can’t produce a current if they are not squeezed. 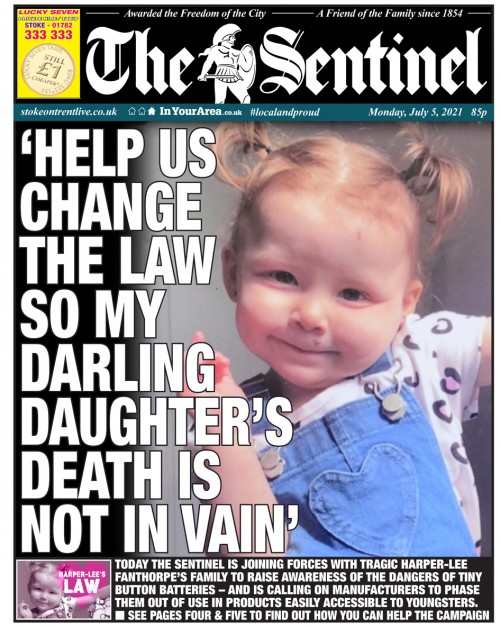 The Sentinel splashed on the campaign’s launch on Monday

The Sentinel also wants manufacturers of goods that are readily accessible to children to phase out the batteries from their product and is demanding retailers use their influence to put pressure on manufacturers to stop producing non-essential items that use them.

Readers are being urged to sign a petition to show their support for the campaign.

Editor Marc Waddington told HTFP: “This is such an important campaign, and one we hope everyone will get behind.

“It’s one of the privileges of doing the job that we do that we are able to bring wider attention to causes such as this, and to give them the exposure that they deserve.

“We hope that we can do something really special to build a lasting legacy for little Harper-Lee.”