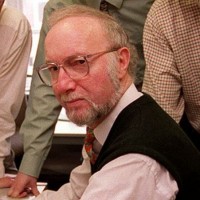 A journalist and novelist who returned to the regional press as editor of a weekly newspaper has died on his 78th birthday.

Tributes have been paid to Colin Northway, who served as deputy editor of the Bridgnorth Journal in the mid-1980s and was later promoted to the top job at the newspaper.

Colin, pictured, began his career at Birmingham’s Sunday Mercury aged 18, later progressing onto the Daily Express in Manchester where he was made features editor.

He then became the youngest features editor in Fleet Street, after being headhunted, before moving to the south of France, where he lived with his wife Gillian for five years and wrote numerous spy thrillers.

Upon returning to England, Colin moved to his Wolverhampton home before applying for the job of deputy editor at the Journal.

She said: “He started work at 18 and worked his way to becoming features editor down in London

“Colin was the youngest features editor in Fleet Street – he’d run all the columns and loved doing so.

“He also wrote spy thrillers, many of them. He co-authored some and wrote Sleeping Dogs, Dead Runner and Blitz, which was one of The Times best sellers.

“He was a highly intelligent man and really was well liked by all his colleagues. He was very kind to his staff and loved working with them.”

Colin is also survived by children Lisa 52, and Daniel, 48, as well as grandchildren, Elle, Harrison, Jude, Cameron, Joel and Sebastian.