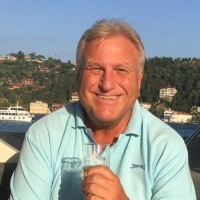 Two sports journalists have said farewell to sister dailies they have each served for three decades.

Sports editor Mel Booth, pictured, has retired from the Huddersfield Daily Examiner, where he has led the sportsdesk since 2006.

Anthony has covered Middlesbrough FC for the newspaper for 28 years.

“The Gazette is my paper. My birth was announced in it and so were the births of my children. My parents’ marriage and mine too. Every milestone marked. And not just my family.

“The Gazette has been part of the social fabric of Middlesbrough and of Teesside forever. And the football club is too. Middlesbrough Football Club is the social glue of a proud and passionate people and it is central to our sense of identity and civic pride, our public face to the world.

“The two institutions have been entwined for generations through twists and turns, success and despair and between them have shaped and recorded our history and folklore, the magic moments caught on the back page and curated carefully in a hundred thousand schoolboy scrapbooks and a pile of old pinks.”

Mel began his career at the Holme Valley Express as a general reporter, before moving into sport at the Barnsley Chronicle.

He then worked for the Sheffield Morning Telegraph before becoming chief football writer at the Examiner in 1985.

During his time there, he has covered Huddersfield Town in all of England’s top four divisions and worked with 30 managers or head coaches of the club.

In a tribute piece, Examiner Huddersfield Town reporter Steven Chicken wrote: “It has been a pleasure working with and getting to know Mel during my so-far relatively short time at the Examiner.

“From the moment we started working together at Selhurst Park on the day Huddersfield Town were relegated from the Premier League with a defeat to Crystal Palace last March, he has been a wealth of invaluable knowledge – about the club and its history, about the finer points of day-to-day reporting, and most importantly, about the best pubs to visit on long away trips.

“I already considered myself a writer when I arrived at the Examiner 18 months ago, but Mel taught me how to be a journalist, for which I will always be grateful.

“I know I’m not the only sports writer to have passed through the Examiner who feels that way.”

There is plenty that younger writers can learn from Mel about how to develop contacts who trust you just as highly as your readers – and a few tricks we can all learn about how to sell a story, too.

He added: “As sad as it will be not to work with Mel anymore, I know from having spoken to him that he is completely happy and ready to step back and enjoy his much-deserved retirement, which he will no doubt largely split between the two loves of his life: his wife Carol, and Scholes Cricket Club.

“Oh… and I’m sure I’ll run into him plenty in the Town press box, too.”