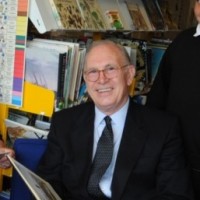 The managing director of two sister dailies who also served on a regional publisher’s board has died aged 83.

Tributes have been paid to Barry Rackham, pictured, who was MD of the East Anglian Daily Times and Ipswich Star.

He also became a board member of Archant forerunner Eastern Counties Newspapers.

An obituary in the EADT said Barry led the two newspapers “through prosperous years and during the era when dramatic technological advances saw computerisation change the way newspapers were produced”.

His son Richard, who became a photographer, writer and sub-editor for the EADT, said: “He had been living bravely with a rare condition called Progressive Supra-nuclear Palsy (PSP) which affects the sufferer’s physical capabilities.

“Mobility, balance, dexterity, speech and sight deteriorate over several years; a very cruel disease and one which was first formally diagnosed in the comic and pianist, Dudley Moore.”

Barry, whose wife Mary died in 2008 aged 69, is also survived by daughter Jane and three grandchildren.

Outside of work, he served as a magistrate, was involved deeply in freemasonry in Suffolk and was part of the Rotary movement.

In recent times, he had been cared for at Cornwallis Court, the home in Bury St Edmunds run by the Royal Masonic Benevolent Institution.