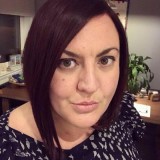 A city news website’s founding editor is leaving to take up a senior role with a leading national LGBT publication.

Hilary Mitchell has announced her departure from Edinburgh Live to become audience editor at Pink News, an online-only title aimed at the UK’s lesbian, gay, bisexual and transgender community.

Hilary, pictured, has edited Edinburgh Live since it was launched by Reach plc in 2018 and was previously Scotland editor at BuzzFeed.

She will be replaced by Claire McKim, Edinburgh Live’s content editor.

Claire joined the site in April after working for JPIMedia in various roles including news editor of the Edinburgh Evening News and deputy head of digital at the Scotsman.

Announcing her departure on Twitter, Hilary said: “I’m sad to leave the site I founded and grew to 10 million page views a month but the legendary Claire McKim will be taking over my job and there is no one I’d rather see adopt my news child.”

Speaking to HTFP, she added: “I couldn’t be happier to be joining Pink News.

“I’ve long admired their work, which shines a light on the many issues still facing LGBTQI people in the world today.

“I’m really pleased my role will be to help bring their vital, industry-leading journalism to an even wider audience moving forward.”