The Manchester Evening News has depicted Boris Johnson as a ‘Joker’ on its front page after tier three coronavirus restrictions were imposed on its patch.

The MEN splashed on the image this morning after Andy Burnham, Labour Mayor of Greater Manchester, accused the government of “playing poker with people’s lives” when talks over a financial package from Westminster to support the region broke down yesterday afternoon.

Mr Burnham’s comments came ahead of the Prime Minister’s official announcement that the new rules would be imposed on Greater Manchester yesterday evening.

Mr Johnson confirmed the region would receive £22m to help enforce the tier three rules, while Health Secretary Matt Hancock told MPs a £60m package to support businesses and employees “remains on the table” – as opposed to a minimum £65m deal demanded by Mr Burnham and other local leaders. 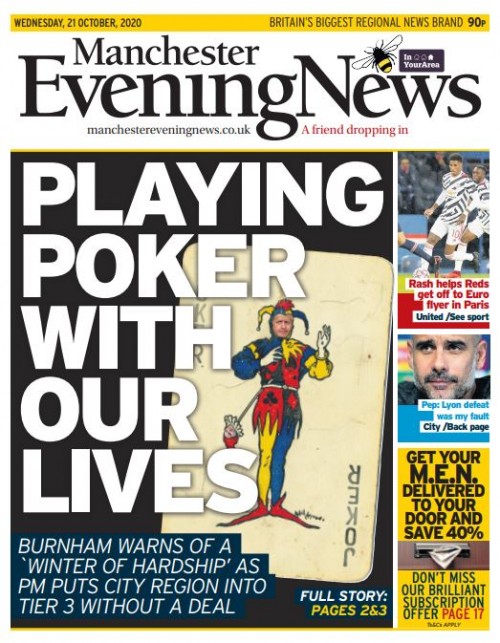 He said: “It’s been a turbulent few days for Greater Manchester and our team has worked extremely hard and with great skill to keep our readers informed.

“There’s widespread anger in the North about doing lockdown on the cheap – and our surveys show there’s very little faith in the government right now in Manchester. We’re facing a winter of hardship.

“At the same time, we’re urging people not to allow their anger at politicians to weaken their resolve in tackling the virus – so we’re urging everyone to follow the health guidelines and protect the NHS.

“The MEN now reaches 18m readers a month online and yesterday’s live audience was just about off the scale. But it remains just as satisfying to bring it all together into a newspaper and to create a front page that captures the mood.

“It’s been warmly received – at least in Manchester, if not Westminster.”

It comes as Mr Johnson prepares to address the second annual Great Northern Conference, hosted virtually by JPIMedia and The Northern Powerhouse Partnership.

Leaders from across business, politics, media and academia will discuss solutions for economic growth across the North of England as the UK prepares for the post-Brexit world.

James Mitchinson, editor of the Yorkshire Post, said: “With ongoing under investment and a health crisis on our hands, the North has been facing its biggest challenges in decades. We now need more than ever to unlock the combined potential of the region. The Great Northern Conference brings together the great minds of the North to help us unify our message in improving health and economic prosperity post-Covid and post-Brexit.’

“When I envisaged the Great Northern Conference from ground zero it was crystal clear to me that the North needed to unite in order to be heard. The communities in this region have been, time and time again, let down during a protracted period of austerity. The North/South divide has become a chasm and it is only getting wider.

“Fast forwards to this, the second GNC, and we have seen the North described as an experimental petri dish in the fight against coronavirus, with northerners likened to canaries being sent down a coal mine.

“We would not find ourselves in this position were there – as The Yorkshire Post repeatedly insists – a fully fledged government department; The Ministry for the North, headed up by a cabinet minister, based in the North representing the 15.2m people who live and work here.