A local democracy reporter has raised more than £1,500 for charity after shaving her hair live on video.

Fiona Callingham, who works for Portsmouth daily the News under the BBC-funded scheme, undertook the challenge in aid of St Wilfrid’s Hospice in Bosham, Chichester, and The Little Princess Trust, which creates wigs for children with cancer.

Fiona was assisted by her parents, who are both nurses at the hospice, to produce a Facebook live video of the shave.

Mum Tracey conducted the shave and dad Robert filmed it. 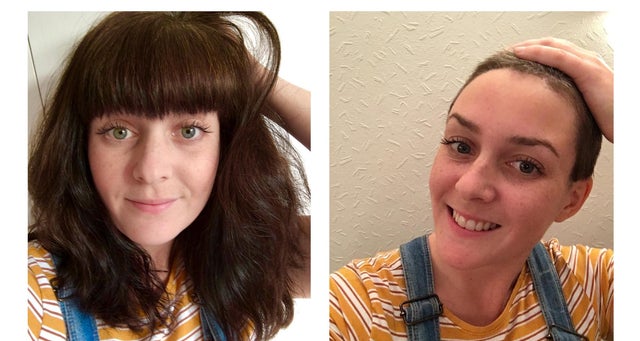 Fiona before and after the challenge

Fiona, 27, moved from Portsmouth to be back with her parents in Bognor Regis when the coronavirus lockdown was announced.

The livestream was watched by more than 200 people and within only four hours her Just Giving page had been inundated with donations totalling £1,000

Fiona, who used to volunteer and work at the hospice, told The News: “I have been blown away by how generous everyone has been.

“We only announced it an hour before the livestream so I think it was a surprise to my friends and family. We initially set our target as £100 but it kept going up and up.”

Both Robert’s mum and Tracey’s dad were cared for at the hospice in the last days of their lives.

Fiona added: “It’s such a special place to both sides of my family, we are so grateful to everyone who sponsored me.”