A prominent legal expert has praised “exemplary” regional press coverage of a child killer’s trial in the face of “nasty abuse” aimed at journalists reporting on the case.

Both the Bolton News and Manchester Evening News have won public plaudits from The Secret Barrister, a bestselling author who writes anonymously on legal issues, after they covered the trial of Eltiona Skana.

Skana was sentenced to life in prison and will spend at least eight years behind bars after she killed seven-year-old Emily Jones in a park in Bolton, but sentencing judge Mr Justice Wall told the defendant she “will remain in prison or hospital for the remainder of your life” if she is never deemed fit for release.

The 30-year-old had pleaded guilty to manslaughter by reason of diminished responsibility, but the prosecution dropped the charge of murder after developments relating to the psychiatric evidence were revealed during her trial Manchester Minshull Street Crown Court. 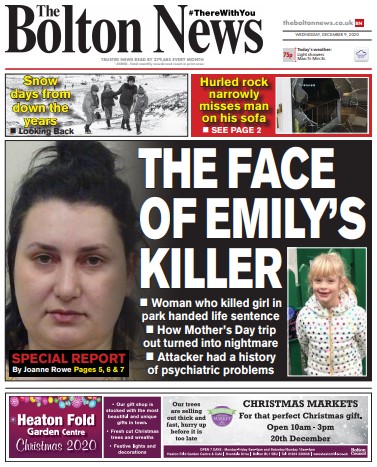 The Secret Barrister’s praise for the News and the MEN came in a series of posts on Twitter which attempted to explain how the judge had reached his decision on Skana’s sentencing.

The author, who is followed by almost half a million people on the social media site, wrote: “I spend a lot of time (and a book or two) criticising poor reporting of legal stories and court cases.

“The reporting of this difficult and complex case by the Bolton News and Manchester Evening News has been exemplary.

Speaking to HTFP, they added: “This case reinforces the importance of local public service journalism, and the value of specialist court reporters, in helping shine a light on the justice system.

“Local journalism is a national asset that we risk losing at our peril.”

In May this year HTFP reported how Karl Holbrook, who was editor of the Bolton News at the time, had hit out at “conspiracy theorists” who questioned why he had not named Skana before she had been charged.

Karl’s successor Steve Thompson has now praised both his chief reporter Joanne Rowe and other News journalists over their coverage of the case in the face of “nasty abuse”.

Steve told HTFP: “This has been a truly horrific case from start to finish and our thoughts remain firmly with Emily’s family who are still going through a living nightmare.

“As journalists we become hardened to bad news but this story had a real effect on the journalists who have covered it, such was its senseless nature.

“Our chief reporter Joanne Rowe has followed the case diligently through the courts from first appearance through to trial and sentence.

“She and the newspaper have at times faced some pretty nasty abuse over the coverage – everything from groups claiming the media were suppressing the identity of Emily’s killer to those suggesting we had sensationalised our coverage – neither true.

“And again, as much as we become hardened to this, it is still not easy to take, so for a prominent legal expert to praise Joanne’s coverage and indeed that of Seamus McDonnell at the Manchester Evening News, is most welcome.

“It shows how well trusted and respected the local press still is.”

HTFP has also approached the MEN for a comment.