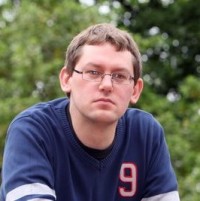 A sports reporter who was raped in a street attack has spoken out after Britain’s “worst rapist” was sentenced to life in prison.

Callum Carson, who works for the West Lothian Courier, was a student when he was raped 15 years ago and later battled depression as he sought to recover from his ordeal.

Callum, 33, has now opened up in a bid to encourage the victims of Reynhard Sinaga, branded “the most prolific rapist in British legal history” by prosecutors, to seek professional counselling.

HTFP reported last week how the Manchester Evening News decided against opposing reporting restrictions after Sinaga’s conviction in order protect up to 195 of his potential victims over Christmas.

Speaking to the Daily Record about Sinaga’s case, Callum said: “I was shocked and disgusted by the sheer scale of it.

“There was such an evil cunning behind it all. He was so calculated and manipulative, in total control of what he was doing.”

Callum, pictured, underwent years of therapy after he was attacked in the street on Christmas Eve 2005.

A court later reached a verdict of not proven when the accused was brought to trial.

Callum and his wife Nicola, 29, who live in Bathgate, West Lothian, welcomed their daughter in September.

He previously waived his automatic right to anonymity five years ago to write about his ordeal for the Glasgow-based Record.

Callum said: “It was a challenging step, but the reaction was overwhelmingly positive. I had one negative comment out of several hundred.

“I wanted to get the message out that you can recover to a degree with help and go on to have a positive, happy life.”