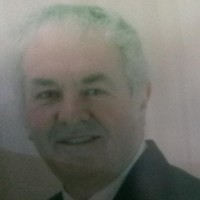 The journalist who was among the first on the scene of the Moors Murders has died aged 85.

Ian Bennett served as the Oldham Chronicle’s Saddleworth reporter for 36 years, working out of its Uppermill district office.

On his third day in the job in 1965, he covered the excavation of the body of Lesley Ann Downey, one of the victims of Ian Brady and Myra Hindley.

He also reported on the finding of a second body, that of John Kilbride, five days later.

According to an obituary in the Oldham Times, former colleagues “described him as a true gentleman, and a gentle man with a smile and a word for everyone”.

Ian, pictured, initially worked on his hometown newspaper the Warrington Guardian before moving to the Chronicle.

He died at his home, which was next to the Uppermill disctrict office where he had worked.

He outlived his wife Marjorie and eldest daughter Jill, but is survived by daughter Sue and granddaughters Rebecca and Victoria.

His funeral was held at Oldham Crematorium on Friday.