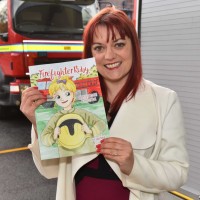 A journalist who became a fire service PR has written a children’s book aimed at inspiring girls to consider a career in firefighting.

Emma Greenhalgh’s book Firefighter Ruby aims to give youngsters “determination and not let job stereotypes get in their way” when thinking about what they want to do when they grow up.

Emma, pictured, worked as a reporter for the Hartlepool Mail and the Teesside Gazette before moving on to a career in communications for the Fire Service.

West Yorkshire Fire and Rescue Service, where Emma now works as a communications manager, currently has around 50 female firefighters who make up around 5pc of its wholetime operational staff.

She said: “It’s hard to believe that even today some young girls are under the impression that firefighting is not a job they could do when they are older, which is sadly and wrongly closing doors in their minds to the profession at a very young age.

“Studies have suggested children decide what they want to be when they grow up as young as five-years-old so I think it’s important they have a true picture of what is possible.

“I wanted to create an assertive female lead character who is a firefighter and works alongside male firefighters to show that they are ‘one family’ and one team. The book does not preach the message, but instead delivers it in a fun adventure story with some quirky characters.

“It encourages girls to believe in themselves and have determination and not let job stereotypes get in their way whatever they want to be.”

Firefighter Ruby: Because Girls Can Be Heroes Too! is aimed at three to seven-year-olds and can be found on Amazon or on Facebook.