Journalism graduate who survived cancer dies at 26 after heart attacks 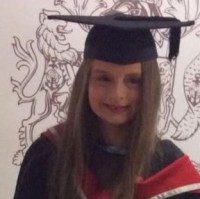 A journalism graduate who survived cancer as a child has died aged 26 after suffering several heart attacks and pneumonia.

Tributes have been paid to Rebecca Lawrence, pictured, who studied multi-media journalism at Teesside University and also had close links to the Teesside Gazette.

Rebecca was diagnosed with cancer twice as a child, at ages three and seven, and the Gazette covered her fight when she was given the honour of serving as Middlesbrough Football Club’s mascot at the 2004 League Cup final.

During her studies, Rebecca had undertaken work experience at the Gazette and produced, among other pieces, a “lovely article” looking back on her experience of the final.

She had successfully completed her first year of a three-year political communications PhD at Newcastle when she contracted pneumonia.

According to the Gazette, Rebecca had been reluctant to go to the doctors in case her cancer had returned and delayed seeking medical treatment, only to suffer several heart attacks.

Her father Ian told the Middlesbrough-based newspaper his daughter was “proud to have been the Boro mascot who helped win them a trophy – and who overcame so many battles in her life”.

He added: “Educationally, physically and healthwise, she approached life with a quiet determination that was humbling to have been a part of.”

Rebecca’s older sister Victoria died aged 19 in 2008 after contracting sepsis and bronchopneumonia, prompting the family to set up a charity called Victoria’s Wish, which helps young people with cancer and their families.

She had also encountered tragedy in 2015, when her mother Lynne died from cancer aged 57.

Rebecca died on 5 December, and her funeral was held before Christmas.