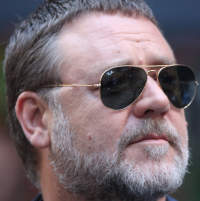 A local news website launched earlier this year has won the backing of a Hollywood actor.

Russell Crowe has endorsed The Stray Ferret, which serves Harrogate, after it ran a story about the Oscar winner.

The site reported how Mr Crowe, pictured, had donated more than £2,000 crowdfunding campaign started by aspiring local actor Harry Pritchard, who is aiming to raise nearly £14,000 to study at drama school in London.

Tamsin O’Brien, founder of The Stray Ferret, told HTFP on Wednesday: “When I woke up this morning to see a Stray Ferret story had been retweeted by Russell Crowe I was amazed. Good for Russell.

“I think it just goes to show how local news can have an impact. I am really delighted for Harry obviously but also for Yasmin Waters the journalism student who found and wrote up the original story.

“Yasmin is an undergraduate studying journalism at Sheffield Uni and spent a few weeks on work experience with us.

“One of her very first stories gets picked up by a Hollywood legend and goes global. Something for her to take back to college and be very proud of.”

The site was launched earlier this year by Tamsin, a former head of BBC Yorkshire.