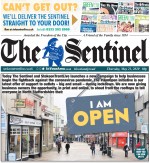 Four new editors have been named in a wide-ranging reshuffle of Reach plc’s Midlands titles which will see its Derby and Nottingham titles placed under a single editor.

A major restructure unveiled in the wake of the coronavirus pandemic saw the departures of several senior editorial leaders in the region, including those of Sentinel editor Martin Tideswell and Leicester Mercury editor George Oliver.

Now Reach plc has moved to fill the vacancies with a raft of fresh appointments.

They include Marc Waddington taking over the role of editor for Stoke, Staffordshire and Cheshire, including Martin’s old portfolio, while the job of editor for Coventry, Leicester and Northants goes to Adam Moss.

The editor role at Coventry, which includes the Coventry Telegraph and its sister website Coventry Live was vacated by Graeme Brown when he was appointed editor of Birmingham Live.

Meanwhile Natalie Fahy, editor of the Nottingham Post and Nottinghamshire Live, adds the Derby Telegraph/Derbyshire Live and the Lincolnshire Echo/Lincolnshire Live to her portfolio.

Other new appointments see Julie Crouch, formerly editor of the Burton Mail, become editor of StaffsLive, reporting to Marc in his role as Staffordshire editor.

And Chris Mallett, who has been acting editor at Derby for the past six months, will take on the role of Northants and Warwickshire editor, reporting to Adam.

Announcing the moves, Reach said Adam had led “impressive digital growth” during his time as digital editor of LincolnshireLive, which was launched in 2016 and is now one of Reach’s fastest growing sites.

Said Adam: “There’s no doubt that the coronavirus pandemic has led to challenges for communities across the country and the journalists at Leicester, Coventry and Northants have been doing a fantastic job at serving up vibrant and informative local news coverage to their audiences during this time of crisis.

“I can’t wait to start working with the teams on all three sites and am really looking forward to helping them build on that success in the future.”

Marc’s new role follows a stint as executive editor, live news, at the Daily Post and North Wales Live, having joined from the Liverpool Echo where he was city editor.

Marc said: “I’m absolutely thrilled to become part of the team in Stoke, Staffordshire and Cheshire. It’s a fantastic patch covered by fantastic journalists, and it’s a real privilege to be working with them on providing first class content for our ever-growing audiences here.

“I began my career as a trainee reporter in Cheshire and have family in Staffordshire, so it’s a great feeling to be working in a part of the country that I know and love.”

Anna Jeys, audience and content director for Midlands, Cheshire and Lincolnshire added: “I’m pleased to be able to welcome Marc, Adam, Julie and Chris to the team in their new roles. Between them they have a great breadth of experience in growing digital audiences and I know they will be a huge asset to the Midlands.

“Each of the appointments announced today will help us to further engage with our local communities and continue to promote quality journalism in our region.”