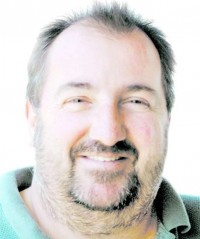 A former regional news and sports editor has died aged 64 after contracting coronavirus.

Tributes have been paid to Simon Haydon, who worked for the KM Group between 2002 and 2005 and also spent time as a journalist working both nationally and internationally.

Simon, pictured, initially joined the group as a sub-editor and then became then sports editor at the Kent Messenger.

He also briefly served as a news editor in Medway and was also known for his Man in Black column about being a local football referee.

Simon had recently been diagnosed with cancer before contracting Covid-19 a fortnight ago.

Fred Atkins, who worked with him on the Messenger sports desk, said: “He wasn’t the average sports editor.

“He spoke fluent French and Swedish, had an exhaustive knowledge of culture and an outrageous sense of humour.

“He was a brilliant journalist and there was literally never a dull moment with him in the office because you had no idea what he was going to come out with next.”

Fred said he believed Simon had bgun refereeing in the Miadstone Leagues after “watching a match and ranting at the officials from the sideline”.

He added: “One of the officials asked if he thought he could do any better and he had a Damascene conversion. From then on he was a fully-paid up member of the refs’ union.

“If you criticised an official in a report he would edit it out and then deliver a lecture.

“His Man in Black columns were both popular and controversial, which was exactly how he liked it.”

Simon joined the Associated Press in London after leaving the KM, heading up their World Cup and Olympic coverage before retiring two years ago.

Earlier in his career, he travelled the world, reporting on major news events including the downfall of Romanian Communist dictator Nicolae Ceausescu.

Simon is survived by wife Barbara and sons Harry, Jack, Tom and Will.