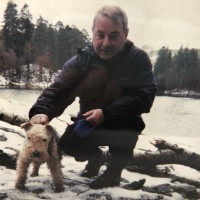 A “fiercely competitive” daily newspaper journalist who also ran a news agency and public relations firm has died aged 71 after a long illness.

Tributes have been paid for Arfon Edwards, who worked for the Daily Post, Western Mail and North Wales daily The Leader during his career.

Arfon, pictured, went on to found Mold-based Dee News in the late 1970s and formed PR company Quadrant, which continued to operate until his retirement seven years ago.

He had begun his career in 1965 as a trainee reporter at the Chester Chronicle, based at its Mold district office.

Former chief reporter Gordon Smith, who later worked for Arfon at Quadrant, said: “One of his teachers came into the office and told me that Arfon had set his sights on becoming a reporter.

“He was very keen and soon showed a great news sense and a willingness to learn.”

Gordon added: “We’ve been friends throughout all those years and even after we both retired we continued to meet on the bowling green or for lunch.”

Arfon’s fellow trainee at the Chronicle, former Daily Post district reporter Gareth Hughes, said: “They were very happy times at the Mold office and we gained invaluable experience. Arfon and I became very good friends, and I had the pleasure of being best man at his wedding.

“Although I remained as a newspaper journalist throughout my career, II always admired Arfon for taking the bold step into PR, and the business acumen he displayed in building up his Quadrant agency, which attracted several very high-profile clients.”

Arfon’s clients at Quadrant included BHP, ICI and leading pharmaceutical companies such as GSK, and Novartis.

He said: “A departing chief executive of a local authority, covered by Arfon, recalled with some chagrin at his leaving party that the council had never in his memory produced a ‘confidential report’ which had not appeared first in the Daily Post.

“That was Arfon. He was probably the most fiercely competitive journalist I ever worked with. The reputation of the Daily Post mattered to him and that meant we had to be first with the news.

“He broke exclusive after exclusive but not before he had checked and re-checked every fact, every quote. He had the kind of contacts book which today, sadly, probably belongs in a museum.

“But despite the fanatical zeal for his job he was great company, he seemed to have boundless energy and had a wealth of hilarious anecdotes which he would impart over a liquid lunch.

“It’s easy to get over-sentimental about the ‘good old days’ but a quick check over the back issues of the Daily Post and the stories written by Arfon will confirm his status as one of the very best. I’m glad I knew him and proud I worked with him.”

He said: “When we first met, Arfon was ‘the ‘opposition’ on the Chronicle while I worked for the rival weekly the Flintshire Leader just around the corner.

“The competition was fierce, but we quickly became firm friends and after several years he agreed to join the Leader before going on to work for the Western Mail in Cardiff before returning north as a district man on the Daily Post.

“After Arfon set up his news agency, he used to organise an annual Christmas ‘bash’ for all the local hacks working in newspapers and broadcasting. Each media organisation would pay in a few quid so that we could invite our regular contacts in CID, the fire and ambulance services, and other selected contacts, as a thank you for the help they gave us throughout the year.

“They were great parties and they really brought everyone together. You always needed to book a day off afterwards.”

John also joined Arfon as a part-timer at Quadrant after he first retired from the BBC in 2005.

He added: “In recent years, I’ve helped to organise the annual ‘Old Hacks’ Christmas get-together for senior journalists from across North Wales. It was always good to see Arfon there, and we enjoyed lunch together at other times of the year.

“He wasn’t well enough to attend last Christmas, but we had a pub lunch just four days before the lockdown and he was really on form. He was one of my oldest friends and such a great pro.”

Arfon, who died on 4 August, is survived by wife Jennifer, children Vanessa and Matthew and four grandchildren.