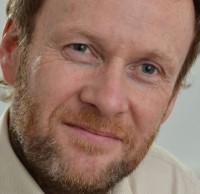 A former regional journalist who was “selfless, patient, wise and dedicated” has died suddenly aged 57 after suffering a heart attack.

Tributes have been paid to Eddie Docherty, who worked for titles including the East Kilbride News, Glasgow Evening Times and Daily Record during his career.

Other newspapers to have carried his byline included the Hamilton Advertiser, Lanarkshire People, West End Courier and Glasgow Courier.

Eddie, pictured, was working as a senior press officer for NHS Lanarkshire at the time of his death on 24 March.

He worked at the News from 2002 to 2008, and former colleague Caorline Wilson told the paper: “I remember him going out to get us all breakfast rolls at the EK News.

“Everyone got bacon and sausage and lovely stuff like that, and he brought me a cheese roll, because he wasn’t sure what to get a vegetarian. We never let him forget it.

“The editor Gordon Bury also decided one day he was going to do a pop quiz.

“Anyway, of course Eddie got about 99 out of a hundred because all the music was from him and Gordon’s era.”

He was a finalist for ‘communicator of the year’ at the NHS Scotland Communications Awards in 2018.

Calvin Brown, director of communications at NHS Lanarkshire, said: “Eddie was such a big part of our team and the wider NHS.

“We’ve been inundated by lovely messages from the many people he worked with here over years.

“He was selfless, patient, wise and dedicated. More often than not, he was the first person to volunteer to help out as well as being the last person to leave at the end of the day.

“We couldn’t have had the pleasure to have worked with a nicer, more genuine guy. We will miss him as a wonderful friend and hugely popular colleague.”

Eddie hosted an annual Eurovision party and even co-wrote and recorded a potential song for Europe called ‘Pants on Fire’, which was rejected as the UK entry.

His sister Pauline told the News: “All the family are devastated. No words can describe what an amazing son, brother and uncle he was. His friends and family had so much love and admiration for him.

“He will be sorely missed. He was a great man who lived a great life and we all loved him dearly.”