A former editor was forced to run around his old patch in fancy dress after losing a bet to a friend.

James Higgins, who used to edit South Cumbrian daily The Mail, took the streets of Barrow-in-Furness dressed as one of the ‘118 Men’ from the directory enquiries advertising campaigns after engaging in a charity wager.

James had bet he could run 90 miles, the length of Hadrian’s Wall, quicker than his friend Matt Johnson.

He subsequently undertook a fancy dress 5k run in Barrow after coming second in the challenge. 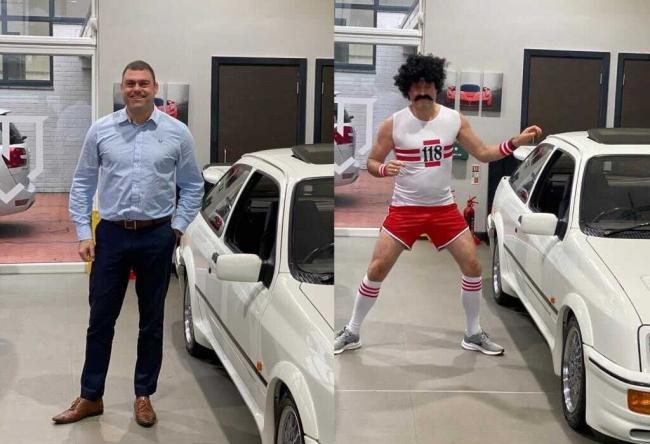 James pictured before and after his fancy dress transformation

James, who now runs PR firm 32West, told The Mail: “The winner could decide where the money would go, but since we both decided it would go to St Mary’s Hospice, in Ulverston , all that was left was to get it going.

“That was the charity side taken care of, all that was left was the pride and dignity side.”

He added: “I got my first wolf whistle in 25 years so that’s something. I suspect it was ironic.

“I’ve made the most tremendous fool of myself and it was all in the name of a bet, charity and fun.

“I just hoped to bring a smile to maybe one or two people in these difficult times.”