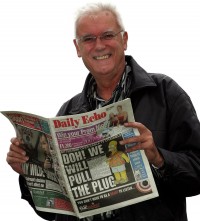 A former regional daily columnist has died aged 72 just weeks after retiring from his job as a radio presenter.

Tributes have been paid for Richard Cartridge, who worked for BBC Radio Solent and also wrote a column for the Southern Daily Echo.

Richard, pictured, retired in June after 46 years in radio.

His death was announced by Radio Solent on Saturday.

In a statement, the station said: “We are deeply sad to announce that our dear friend Richard Cartridge has passed away following a short illness.

“Richard entertained the south on-air for over 46 years. Thank you Rich.

“Our thoughts and prayers are with his family. He will be deeply missed.”

In 2013 Richard revealed he had fought mental illness.

He was unaware he was suffering from bipolar disorder until around 1997, when he and his second wife separated.

Sports presenter Mike Bushell, who appears on BBC Breakfast, added: “One of the greats is gone.

“He was one of my mentors and inspirations when I first started at the BBC.”

In 2005 he suffered a personal tragedy when his son James, the middle child of three from Richard’s first marriage to Carol, was found dead outside his home aged 29.