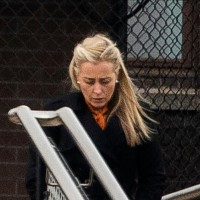 An editor has shared “considerable concern” after a convicted money launderer launched a publicly-funded legal bid against his newspaper to win lifetime anonymity.

Joanne Cassidy took up legal action against Belfast’s Sunday Life in an attempt to anonymously gain a lifetime blanket ban on reporting of her crimes past, present or future.

Cassidy, 44, was handed a two-year suspended jail term after being convicted of money laundering alongside her drug dealer husband Jim Cassidy, also 44, and two others at Craigavon Crown Court earlier this year.

But, during a short hearing at the Royal Courts of Justice last Wednesday, the case for an injunction against Sunday Life was thrown out by His Honour Judge McFarland, the Recorder of Belfast, sitting as a Deputy High Court Judge.

Cassidy, pictured, had sought to prevent any further details of her criminality coming to light, including media coverage of future court appearances such as her upcoming confiscation hearing. but the application for an interim injunction was dismissed after her legal team conceded the contest at the eleventh hour.

According to Sunday Life, it is thought to be the first time a convicted criminal, taking a case using public money via the legal aid system, has sought to gag the press from reporting on further public criminal proceedings using privacy laws.

Martin Breen, deputy editor-in-chief of Sunday Life and Belfast Telegraph, said: “Sunday Life is a firm believer of the freedom of the press and will not bow to legal threats from criminals.

“It is a matter of considerable concern that at a time when public finances are under significant strain from Covid-19 the Legal Services Agency thought it appropriate to grant legal aid to a convicted criminal to ban reporting of public criminal proceedings.”

He said: “This application represented a very serious attack on the freedom of the press and open justice, two core principles of our democracy.

“Thanks to the resolve of the Sunday Life team, and the considerable efforts of our senior counsel, Gerald Simpson QC, we were in a position to robustly contest it, and ultimately see the application off.”