A regional daily named a teenager who killed his “best friend” after a successful bid to overturn reporting restrictions.

The Leicester Mercury and its Leicestershire Live sister website won the right to identify 17-year-old Dylan West after a judge agreed it was in the public interest to name the killer, who stabbed 18-year-old Joshua Taylor to death, after he was convicted of manslaughter.

Mercury court reporter Suzy Gibson had raised the question of the Section 45 Youth Justice and Criminal Evidence Act reporting restriction at Leicester Crown Court after the jury retired to consider its verdicts in the case.

She asked Judge Philip Head to consider lifting the order in the event of a conviction for either murder or manslaughter, in the public interest and due to the gravity of the offence, adding West was also due to turn 18 in June. 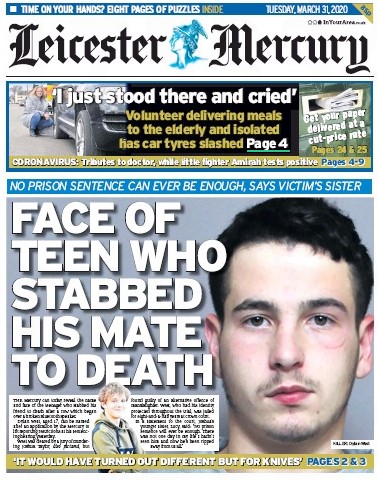 The Mercury splashed on West’s sentencing on Tuesday

Suzy told HTFP she “thought it appropriate to put the judge on notice before a verdict was announced, to give all parties time to consider the matter”.

She said: “It did not lead to a legal argument but, had it done so, I would have pointed out that the deceased, Joshua Taylor – who had been named throughout – was described as the defendant’s ‘best friend’ and had criticism levelled against him throughout the trial.

“Joshua, 18, was accused by the defendant – who claimed he acted in self-defence – as having been the aggressor at the time of the killing. I would have argued that, in fairness, West should also now be named.

“I would also have bolstered the argument by stating that a high court judge, at the same court, had previously lifted a Section 45 order, in the case of another 17-year-old youth when he was found guilty of raping and attempting to murder a young woman in a local park.

“I would have stressed that the victim in that case had not, in fact, died and yet the order was still lifted on conviction.”

“I think that putting the judge on notice of our intention to raise the matter on conviction assisted in this case.”

Suzy’s colleague Tom Mack covered West’s sentencing hearing, at which Judge Head said it was “not in the interests of justice” to continue anonymity.

West, of Hinckley, Leicestershire, was jailed for eight-and-a-half years.

The judge said that prior to the verdicts, when West was also convicted of possessing two knives, it was in the defendant’s “welfare interests” for him to be anonymous because his age had “trumped the public interest” regarding his identity.

He added: “But now, in the interests of open justice, there’s a legitimate public interest in knowing about the offences of this defendant.”

Tom said: “There was no need to argue the case for lifting the order. The judge had clearly decided that, because of the seriousness of the crime, it was in the public interest to name him.”