A regional daily has apologised after falling victim to a “malicious hoax” which prompted it to publish an obituary for a 27-year-old pub landlord who is still alive.

South Cumbria daily The Mail has said sorry after a hoaxer who gave the name John Todd contacted the newspaper on Monday to claim his close friend, pub landlord Jack Stilling, had died.

But after the obituary was published on Tuesday, the real Mr Todd – who is indeed a close friend of Mr Stilling – got in touch with the Mail to reveal the pub boss was alive and well, and denied having contacted the newspaper.

The impostor who posed as Mr Todd had initially emailed the Mail before giving a telephone interview.  The subsequent story, pictured below, claimed Mr Stilling had been found dead at the pub he runs, the Hare and Hounds in Bowland Bridge. 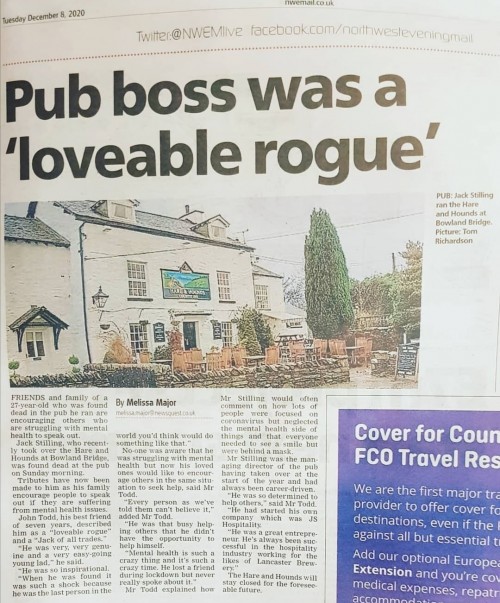 A correction and apology was published on The Mail’s Facebook page on Tuesday afternoon.

It reads: “The Mail was yesterday the victim of a malicious hoax.  A story featured tributes to Jack Stilling, 27, owner of the Hare & Hounds in Bowland Bridge.

“We are delighted to report that Mr Stilling is in fact alive and well.

“The Mail was contacted first by email over the weekend and then by telephone on Monday by a man claiming to be Mr Stilling’s close friend John Todd.

“Mr Todd has since told The Mail he did not send the email and nor did he provide a telephone interview. We apologise to Mr Stilling and to all his family and friends for any distress caused.”