A regional daily has given front page backing to a bid to clean up its patch.

Portsmouth daily The News is supporting a new campaign called ‘Don’t be a din – put it in the bin’.

The phrase, a Portsmouth dialect term, is set to be emblazoned on bins and posters across the city.

The News lent its backing to the campaign on the front of Friday’s edition, pictured below. 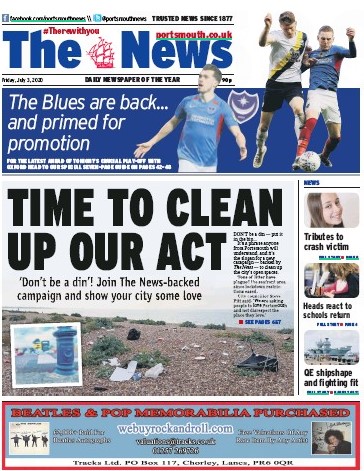 Steve Pitt, deputy leader of Portsmouth City Council, told the newspaper: “We are desperate for people not to leave rubbish lying around and recycle it at home if possible, and if not there are plenty of bins around.

“As a city we have pulled together really well and made a big effort to deal with the pandemic, but people have been rightly concerned about these large gatherings.”

The council spends around £160,000 on clearing rubbish from public spaces every year.

Councillor Pitt added: “All of that litter costs time and money to collect. It also takes away pleasure and enjoyment for people and it’s damaging the city’s reputation.

“When I was growing up if you did something stupid people would tell you not to be a din. So we want people to be really proactive and if they see someone littering shout: ‘don’t be a din, put it in the bin.'”