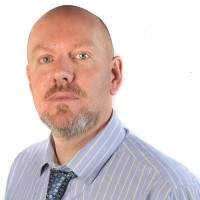 A football club has commissioned a regional daily journalist to write a book about its last spell in England’s top flight.

The book will be released to celebrate the 20th anniversary of City playing in the top flight, and this October Simon himself will mark 20 years covering the club for the T&A.

He has interviewed key squad members, supporters and club officials reflecting on the memorable era for the book

Simon told the T&A: “It’s a real privilege to be asked to write the Premier League Years book for City. It was a huge moment in the club’s history – their first appearance in the top flight in 77 years.

“They were two eventful, if very different, seasons. One full of ‘pinch yourself’ excitement at rubbing shoulders with and, in several cases, beating some of English football’s elite.

“The second saw the decline that would ultimately accelerate into a slide down the divisions. But there are stories to be told. I started at the Telegraph & Argus in that relegation campaign, arriving after City’s best Premier League moments.

“So, it’s great to relive them now by speaking to those involved – players, managers and fans. I hope it will be as enjoyable to read as it is to compile.”