The Peterborough Telegraph is campaigning for those who kill while under the influence of drink and drugs behind the wheel to get life in jail.

The Telegraph’s campaign comes after Tommy Whitmore was jailed for eight years and four months for causing the death of three people – Marko Makula, his fiancée and mother-of-two Jana Kockova and her brother Tomas Kocko.

Whitmore had been drinking and smoking cannabis before the crash in Peterborough. 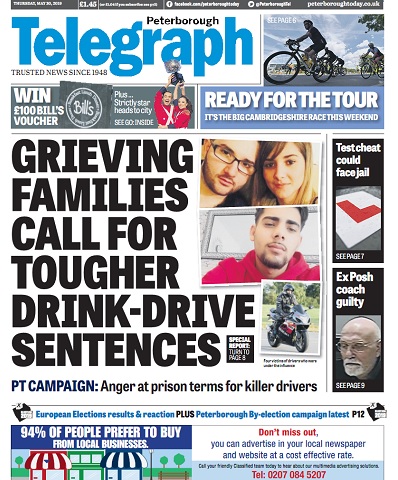 The Telegraph splashed on the campaign last week

Mr Maula’s brother Mario told the Telegraph the family of the three victims were “devastated” by the sentence – and called for tougher punishments for drink and drug drivers who kill, who at the moment cannot receive more than 14 years in prison.

Now the family of Michael Howard, a grandfather who was killed by Neville Smith, a driver who was high on drugs, have backed the calls to increase sentences handed out.

Ann Kidd, Michael’s brother, said: “When you listen to the levels of punishment being discussed and realise that it can be categorised into different sentences it is heart-wrenching to think that taking a life by crime isn’t seen as murder and quite often the offender gets less than a year.

“In our case hearing that he would be sentenced using the highest possible category felt justified and with a guide of eight to 14 years we felt this was the right decision.”

She added: “We know that giving bigger sentences will not bring your loved one back but it does give you peace of mind the offender will at least share some of your pain for their crime.”

At the end of 2017 the Government set out plans to introduce life sentences for people who cause death by dangerous driving and for careless drivers who kill while under the influence of drink or drugs, but since then no legislation has been introduced.

A Ministry of Justice spokesperson said: “We will bring forward proposals for changes in the law when parliamentary time allows.”