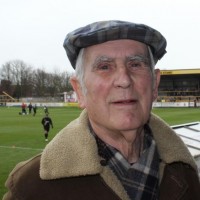 A sports editor who covered a football club for more than four decades has died aged 91.

Tributes have been paid to Alan Prole, pictured, who wrote about Southport FC from the 1960s onwards and continued to cover games after his retirement.

Alan was known for giving a “frank, honest view” of matters concerning the club while working on the Southport Visiter.

Notable events he reported on at the club’s Haig Avenue home ground included an FA Cup tie against Everton in 1968, and Southport losing its Football League status 10 years later.

BBC Sport reporter Neil Johnston, who worked alongside Alan during the 1980s, said: “I would have been about 18 in the late 1980s and my first job in journalism was the Southport Star.

“I used to be a news reporter and on the weekends I would volunteer to give up my Saturdays going wherever Southport FC were playing.

“Alan would have been a kind of rival but never saw me like that. He gave me some great advice about how to cover Southport matches. He was very welcoming, a very friendly guy.

“What I liked about him and what impressed me was that respect he had with players and managers. He was such a big figure within the club – he was a Haig Ave legend.”

Alan had followed his father into sports reporting, and first covered the club’s matches while working for the Lancashire Evening Post.

He later moved on to the Visiter, where he remained until retiring in 1993.

Alan continued to report on games for the Press Association and Liverpool Daily Post and, aged 77, was seriously injured when he fell down the stairs of the main stand while reporting a game on Boxing Day 2005.

He remained undeterred and returned to his place in the press box weeks later.

To mark his 90th birthday, the club presented him with a replica shirt with his name and the number 90 printed on the back.

A Southport FC spokesman said: “Alan will always have a very special place at Southport FC, having reported on many of the key moments in the club’s history during more than 40 years of covering our games.

“Alan was a fantastic person, warm and witty, who was loved and respected by everyone around the club, particularly those who worked alongside him in the press box.

“Alan was admired for the way he reported, in particular the detail and style of his match reports. He was a unique person and will be greatly missed.

“Our sympathies are with Alan’s wife, Sylvia, and all of his family and friends at this sad time.”

Alan had been married to Sylvia for almost 63 years, and is also survived by children Andrew, Nick, Simon and Louise, nine grandchildren and one great-granddaughter.

Nick said: “He was first and foremost a family man. His greatest joy in life was spending time with his family.

“Covering Southport was a great joy to him and he was as much a supporter as a reporter and was well known personality in the press box and around the ground as well.”

Alan’s funeral will take place at Southport Crematorium at 10am on Wednesday.