A newspaper has issued a front page plea to readers to ‘leave the keys at home’ after sharing the stories of victims of drink driving.

The Sunday Mail has launched its ‘Leave the keys’ campaign after interviewing the families of people killed in drink-driving incidents for the campaign.

The Glasgow-based title, owned  by Reach plc, paper splashed on its launch on Sunday, pictured below.

Statistics revealed by the newspaper showed the number of culprits getting behind the wheel drunk in Scotland has increased, despite repeated campaigns to eradicate the offence. 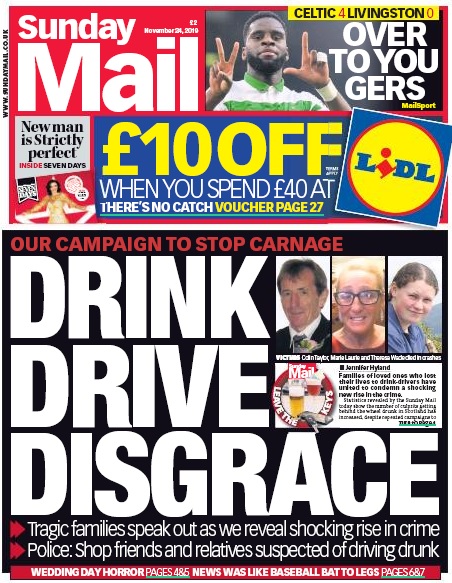 An accompanying editorial states: “This is not a trivial crime. That’s why we’ve launched our Leave The Keys campaign ahead of the party season.

“The fact that there are any incidents at all means there still needs to be a change in attitudes towards the drink-drive culture.

It has never been easier to leave the keys at home. In the age of the Uber and plentiful public transport options excuses are non-existent.

“Superintendent Louise Blakelock, deputy head of road policing at Police Scotland, admits warnings to the public are being ignored. She calls for the friends, partners and families of drink-drivers to report them to the police – confidentially, if necessary.

“For many this is something of a taboo. Again it’s a cultural thing – nobody likes a tell-tale. But it isn’t just justifiable. It’s imperative.

“Anyone who turns a blind eye becomes complicit. There should not be a single second’s hesitation in reporting a drink-driver. The Scottish public can ensure that the abomination of a rise in statistics never happens again.”