Newspaper comes out for Greens ahead of European elections

A newspaper has officially come out in support of the Green Party ahead of the forthcoming European elections.

The Sunday Mail took what it termed the “historic step” of backing the Scottish Greens – saying climate change is “the biggest issue confronting our country and our planet”.

The Glasgow-based Mail, which is the sister title of the Daily Record, urged its readers to vote Green in an editorial published on its front page.

In the piece, the Reach plc-owned title said the election had “been turned into a proxy referendum on Brexit – the issue which has crippled our politics for almost three years and counting”. 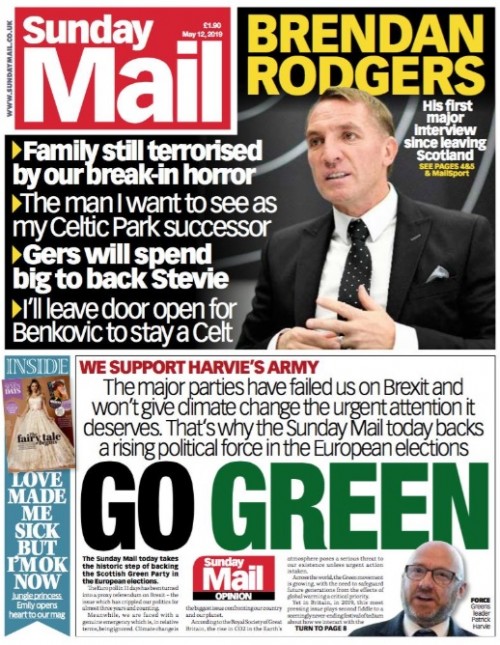 It added: “We are faced with a genuine emergency which is, in relative terms, being ignored. Climate change is the biggest issue confronting our country and our planet. According to the Royal Society of Great Britain, the rise in CO2 in the Earth’s atmosphere poses a serious threat to our existence unless urgent action is taken.

“Across the world, the Green movement is growing, with the need to safeguard future generations from the effects of global warming a critical priority. Yet in Britain, in 2019, this most pressing issue plays second fiddle to a seemingly never-ending festival of tedium about how we interact with the countries in closest proximity to our own.

“For decades, the Greens have been dismissed as a well-meaning but frivolous collection of hippies who might have a point about the environment but who couldn’t be trusted with their hands on the tiller of a first-world economy. That’s no longer the case. The movement is serious, it’s grown up and it’s here to stay.

“Yes, the Green election manifesto largely focuses on the environment. But the party also now has a developed picture including proposals on regenerating communities which have never recovered from post-industrial decline with their job-creating Green New Deal.”

The Mail went on to add that the Green Party was pro-Remain and “stuck to its guns at every stage in the Brexit negotiations”.

It added: “What a message it would send if Scotland elected a Green MEP and rejected [Nigel] Farage’s Brexit party, Ukip and the sinister band of vaudevillian characters who sail in both.

“It would give fresh legitimisation to the issue of climate change and make it more difficult for the cause to be framed as the preserve of a rent-a-mob group of protesters, hypocritical celebs and cranks.

“It would tell our major parties we are sick of the Brexit obsession and constitutional bickering. It might just be a start in rearranging some very skewed priorities.”