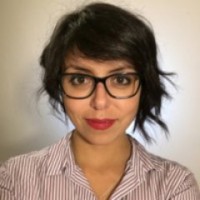 Social enterprise PressPad, which was co-founded by journalist Laura Garcia, has launched a crowdfunding campaign after being selected to take part in Crowdfunder’s Back Her Business competition.

Laura, pictured, has worked with the Kent-based publisher’s KMTV channel as part of her work at the University of Kent, where she teaches.

PressPad matches interns with London-based senior journalists who have a spare room for them to stay in and can also offer advice and mentoring during unpaid work experience stints in the capital.

Since PressPad set up a pilot in 2018, 50 interns have been helped by the service, and PressPad the organisation plans to use the money raised through crowdfunding to hire a part-time coordinator to help them match more young people with senior journalists.

If successful in reaching the target, PressPad could win up to £10,000 extra if the Back Her Business judges are impressed by its efforts.

Laura’s co-founder Olivia Crellin, who works for the BBC, said: “There are lots of very admirable mentorship schemes for people of colour, women, and those with disabilities but we believe that the true barrier – and one that affects many applicants classed as ‘diverse’ – is financial.

“We know there are so many people out there who work in the media but aren’t in a position to put an intern up in their home.

“This is their chance to get involved as well as anyone who really cares about making the media better.”