Weekly journalist who went on to national career dies aged 50 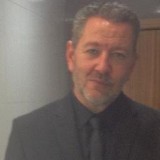 A former regional journalist who went on to a career with the nationals has died aged 50.

Tributes have been paid to Simon Ricketts, formerly of the Watford Observer, who had battled cancer for several years.

Simon, pictured, later went on to work for a number of national titles including The Guardian, The Independent and the Daily Mail.

In a 2016 blog post revealing his cancer has become terminal, Simon said of the Observer that he had considered himself “lucky to have worked for a local newspaper I loved.”

Simon’s death was announced on Saturday by his screenwriter partner Andrea Gibb, who posted on Twitter: “I’m so sad to let you know that our beloved Simon died earlier today.

“He endured a great deal over the past year, but he was Simon N Ricketts till the end; stubborn, funny, brave, kind and loving. He had the heart of a lion and we loved him very much.”

“He was an excellent, committed editor as well as a fun and loyal colleague. He maintained a fierce, gentle humanity in the face of great suffering. He will be deeply missed by everyone at The Guardian.”