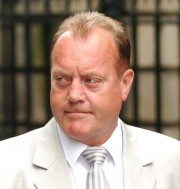 A former regional daily reporter and union rep known as a ‘fierce negotiator for staff rights’ has died aged 63.

Allan Caldwell, left, worked for Glasgow’s Evening Times for many years and was also father of the newspaper’s National Union of Journalists chapel.

Regarded as being equally at home in print or broadcast journalist, he also enjoyed a career with the BBC.

Former colleagues remembered him with affection although one newspaper lawyer admitted to having had sleepless nights after approving his copy.

Friend and former leader of Glasgow City Council Steven Purcell said: “For the few people that Allan let close to him, he was always a steadfast friend.

“In the past few years of his life, it was lovely to see him completely besotted by his grandson Cameron and have the joy of so much time in the company of his daughters Sharon and Sarah-Jane.”

Evening Times news editor Deborah Anderson said: “We are deeply saddened to learn that our friend and former colleague Allan has died.

“He helped me when I first joined the paper and he was a character to have around the newsroom. However first and foremost he was a first class journalist who always got the story. Our thoughts are with his family at this time.”

Former colleague Alistair Nicol said: “I worked and “played” with Clad at the Evening Times for about ten years. He truly was one of a kind with a penchant for getting stuck in.”

And Vivienne Nicoll, who also worked alongside Allan, said: “He was a great friend and a fantastic journalist. He was one of the best foot in the door men I have ever encountered.”

Scottish media laywer David McKie commented: “Terrible news. I learned how to legal stories by going through his copy when he was with the Evening Times and not sleeping too well after approving his copy.

“He was an excellent reporter. So sad to hear this.”