A regional daily lampooned a police public relations campaign by offering readers the chance to win a bag which would help them survive in a “post-apocalyptic wasteland.”

The Dundee Evening Telegraph ran the contest after Police Scotland ran a social media campaign highlighting September being “preparedness month”, while also urging people to have a “grab bag” at hand containing essential items including medication, copies of important documents, food and water, a torch, radio and other personal items.

The campaign met with widespread bemusement, with many Twitter users asking for clarification on the kind of emergency in which such a bag might be useful.

The Evening Telegraph picked up on the response by running a piece in Tuesday’s newspaper mocking the message.

September is preparedness month. Emergencies can happen at any time and it’s recommended to have a #GrabBag ready containing essential items including medication, copies of important documents, food/water, torch, radio and other personal items #30Days30WaysUK #BePrepared pic.twitter.com/7ZtQlVJ7Yr

It read: “Whatever impending disaster Police Scotland has in mind, the Evening Telegraph is taking the warning seriously. That’s why we’re offering one lucky reader a ready-made Grab & Go bag for when the time eventually comes to flee your home and survive for as long as you can on nothing but the most essential items.

“You’ll be the envy of the post-apocalyptic wastelands as you enjoy a variety of basic human requirements such as clean socks, toiletries and a bottle of water. As an added luxury, we’ve even thrown in some batteries and a special Evening Telegraph portable phone charger.”

Other items included in the Evening Telegraph’s bag included a radio for those who “wouldn’t want to miss the Top 40″ in the event of the apocalypse, a whistle “just in case any last-minute football matches need refereeing as you flee the hitherto unknown danger” and a pair of Dundee United thundersticks the paper had lying a round from a previous promotion it ran “to help attract attention.”

Evening Telegraph deputy editor Ross Logan told HTFP: “In these uncertain times, Police Scotland’s Grab Bag tweet is an important reminder that the threads of society could unravel at any moment.

“We wanted to give our readers the best chance of survival in a dying world – by offering one lucky punter basic hygiene and sustenance for the days immediately after the unspecified disaster.

“Within minutes of the competition going online we had numerous would-be survivalists getting in touch, all of them eager to be the envy of the post-apocalyptic wasteland thanks to our snazzy Evening Tele survival kit.” 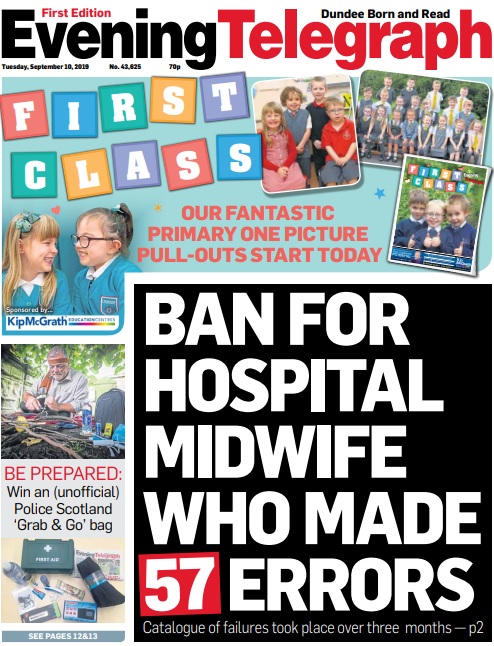