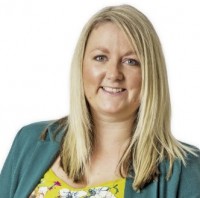 A regional daily has hit back at a government chief who accused the newspaper of giving negative stories “much more prominence” than positive ones.

States of Jersey chief executive Charlie Parker claimed media monitoring by his authority supported his claim about the Jersey Evening Post when he made the remarks during a speech at a Chamber of Commerce lunch.

But his comments have prompted JEP assistant editor Lucy Stephenson, pictured, who was also at the lunch, to criticise the government’s current media access policy.

In an opinion piece recalling the lunch, which happened earlier this month, Lucy said Mr Parker had “laid into the media – this newspaper particularly –in quite spectacular fashion”.

He added: ‘ “So what?” I hear you say. That’s the role of the press. Nonetheless, this default negativity about the government does have an impact on staff’s willingness to take risks, and raise their heads above the parapet.

‘Yet when the media take time to do some in-depth sessions, both with me and other colleagues – whether by interviews on the TV or radio – they often get a better and more accurate picture of the changes we’re trying to deliver, the reasons why and the long-term benefits.

“My sense is that if the print media spend time really understanding the modernisation of our public services, rather than seeing it as a cheap source of easy copy, then they will get better information, more stories and therefore provide a better service to Islanders.”

Lucy attempted to confront Mr Parker about his remarks after his speech, but he declined to be interviewed and instead offered to conduct a sit down interview with her later this year.

In her piece, Lucy wrote: “However hard this newspaper tries, and our media colleagues say the same thing, we are increasingly being barred from accessing real people with real, meaningful information.

“We ask to speak to someone and if we are lucky we get (often days later) a statement of a line or two that cannot be attributed to anyone but that faceless spokesman or woman. If you have further questions, the whole process starts again.

“It is disingenuous to claim that the media, and particularly this newspaper, which has a proud history of scrutinising a matter of such important public interest as the internal workings of our government, is the one stifling the public’s access to clear, important information.”

Speaking to HTFP, Lucy added: “For the past 18 months Jersey’s government and civil service has been undergoing an intense period of change, spearheaded by a new chief executive.

“There is no denying that change was needed, but morale has been affected. Myself and my colleagues make no apologies for our robust scrutiny of the process and the decisions being made – both politically and by the senior leadership of the civil service.

“After all, as a senior journalist who has specialised in local government and politics for more than ten years it is my job to do exactly that. On an even more simple level, however, I see it as my job to make sure that Islanders know what is going on and why.

“And part of that story, particularly in a small island like Jersey, is how that information is being managed and controlled, hence why I felt it was important to set the record straight with this article. At the very least I hope it gives people an insight into the current challenges the media faces on a daily basis, not just in Jersey.”

A spokesman for the Government of Jersey said: “Jersey’s Government is committed to open and transparent communications to Islanders, whether directly, via social media or through traditional media.

“So far this year we have issued more than 500 press releases and answered more than 2,500 queries from journalists, as well as running social media, information and advertising campaigns, ensuring that the Government is communicating through all available channels to its audiences.

“Like any government or large organisation, we have a professional central communications team to manage our relations with the media, stakeholders, and advertisers. Jersey’s media continues to have direct access to Ministers, in addition to any access co-ordinated by the communications team.”