Daily columnist celebrates half a century in journalism 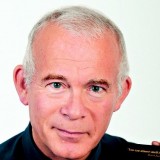 A regional daily columnist has celebrated half a century of working in the journalism industry.

Peter Rhodes, who writes for Wolverhampton daily the Express & Star, has marked 50 years in the trade after starting out as a reporter a few days after the 1969 moon landings.

Peter, pictured, began life on the Leamington Spa Courier and estimates there have been “about 8,000 interviews and 12 million words” since.

In a column for the E&S looking back on his career, Peter said he believed he had “made the right choice.”

He wrote: “Back in ’69 the Press was associated with chain-smoking and liquid lunches and, according to my school careers master, was notoriously insecure.

“With an air of great authority, he’d recommended an apprenticeship in widget-making in the car industry for a long, safe career. I am still hacking away. The ‘safe’ widget factories vanished years ago.

“I was the youngest of half-a-dozen reporters. I loved their sparky, irreverent company, their ability to balance a fag and pint while dictating copy over the phone.The job seemed one long laugh.

“Until one sunny afternoon some weeks after I started when I was sent with a photographer to cover a farm fire. We met a fire officer in the lane. ‘Much up?’ asked the photographer. ‘Fatal,’ replied the officer.

“Some moments you never forget. After 50 years that single word still marks the instant when the game turned serious. As an old hack told me at the time, just because somebody wakes up fit and healthy in the morning, it’s no guarantee they will last the day.”

Peter later worked reporter from across the world for the Express & Star – including Hong Kong, Sri Lanka, Jerusalem and the Arctic.

He added: “In the Maldives after the 2004 tsunami, shell shocked villagers told me how the waters swept over their island and three children were never seen again.

“In the madness of the Balkans, I was on the RAF Hercules that braved the Serb guns and flew into the airfield to break the siege of Sarajevo. Job done.

“And then there were the celebrities, the princes, the paupers and all the other countless players in 50 years spent watching this world and turning events into keystrokes.

“I could have churned out widgets. I chose to churn out words. And I couldn’t have done any of it without the support of many editors, wonderful colleagues and some great readers. My thanks.”