Two sister dailies which campaigned to get more organ donors on their patches have welcomed a new law which will automatically sign people up to the register.

HTFP reported three years ago how the Lancashire Post had launched a bid to sign up 2,016 new organ donors in 2016 in a campaign, also adopted by its then-Johnston Press sister daily The Gazette, Blackpool.

Now the two titles have welcomed the introduction of new legislation, which will come into effect next spring and means consent for organ donation after death will be presumed unless people have opted out while still alive.

Under the current rules, people have to opt-in to become a donor and be listed on an NHS register. 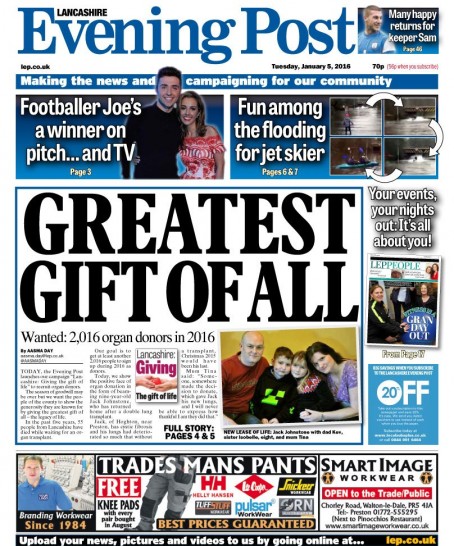 The government has estimated the move could save up to 700 lives every year.

Gillian Parkinson, who edits both titles, said: “Our ‘Giving the gift of life’ campaign was successful in encouraging more people to become donors under the old system.

“However, the new legislation will mean that even more people who desperately need a transplant operation will be able to find a suitable donor, so we are delighted to see the opt-out rule come into law.”