A weekly newspaper has urged people to “talk about suicide” after the deaths of three teenagers on its patch in the past month.

The Press has reported on what it describes as a “heartbreaking epidemic”, and says it wants to “start a conversation” about mental health. 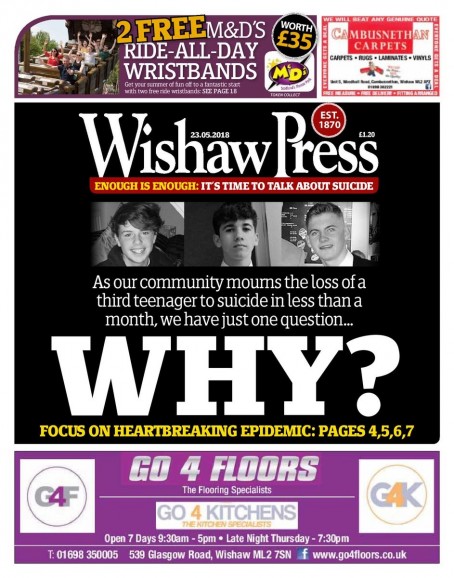 He said: “Callum Dunne, Stephen Mearns and Murray Aitken Boal were all teenagers who saw no other way out. Taking their own lives seemed the only option. Their families and friends are devastated. The community is shattered.

“Everyone is asking the same question: Why? The feedback from our readers is that ‘something needs to be done’… and the Wishaw Press team agrees.

“We’ve spoken with local charities, support groups, health care professionals, community representatives and schools to get a clear picture of which areas they think we should be tackling and we will be running a targeted mental health awareness campaign over the next couple of months.”

Within three hours of posting the front page on Facebook, the Press had reached around 18,000 people and been shared hundreds of times.

“We feel it’s never been more important to talk about mental health and in today’s paper we are starting that conversation.”