A weekly newspaper has dedicated its front page to a sporting event’s visit to its patch in a bid to shake off claims it doesn’t cover good news stories.

The Goole Times has previewed the upcoming Tour de Yorkshire cycle race, which will pass through its patch for the first time next week.

The Times covered the involvement of people on its patch in the race, and informed readers of the events planned in the villages of Holme-on-Spalding-Moor, Airmyn, Howden and Rawcliffe, through which the competitors will pass on Thursday (3 May).

Reporter Ashley Pemberton said it was hoped the coverage would combat claims “there’s never any good news” in the Times, which has led to the paper being nicknamed the ‘Goole Crimes’ by some. 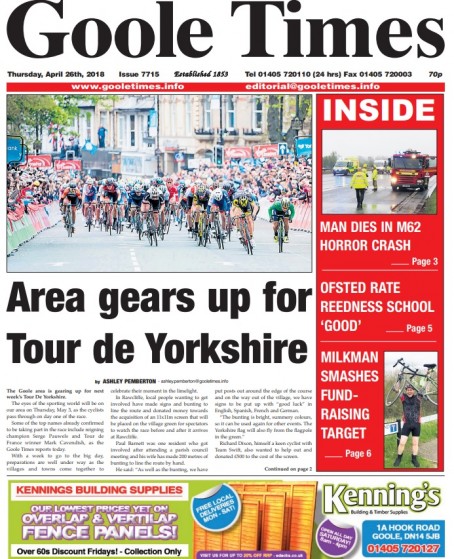 Ashley told HTFP: “It’s a massive event for our area, with local businesses and residents coming together in partnership to get involved and celebrate the occasion.

“It’s the first time the race has come through our patch – in previous years, it has started in nearby Selby – so it’s exciting for us to be able to report on such a high-profile event too.

“It’s also nice to splash with a big, positive story. We’ve had a lot of hard-hitting front pages this year, especially with the brutal murder of Shane Gilmer, and people always love a moan that ‘there’s never any good news’ – people in the town even refer to the newspaper as the Goole Crimes for obvious reasons.

“This is great news and it deserves to be celebrated and I’m sure our readers will think so too.”