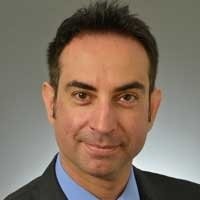 A respected financial journalist who worked for a number of regional and national newspapers has died aged 54 after a battle with stomach cancer.

Walid El-Gabry, left, began his career at Newcastle daily The Journal in the early 1990s after gaining a degree in communications and media studies at the University of Westminster.

He went on to join the business desk at the Press & Journal, Aberdeen, before landing a job on the Financial Times in 1997.

Walid died in New Jersey on 21 September in the arms of his wife Vibe, while listening to a David Attenborough documentary about the blue whale.

Born in Darlington to an Egyptian father and English mother, Walid spent his early life in Cairo before moving back to the North-East.

He moved to New York with the FT in 2001 after becoming news editor of its international capital markets section and stayed with the newspaper in a number of roles before stints at Dow Jones and Bloomberg.

He joined the financial industry itself in 2012, initially as a vice-president for content marketing at BNY Mellon before becoming a director in the marketing team at BlackRock, where he worked until 2015.

At the time of his death he was serving as a vice-president for Prologis working in private investor marketing.

John Coppock, who worked with Walid at The Journal, remembered him as “a talented business journalist whose skill earned him top editorial jobs on many leading publications.”

“Walid was one of those rare journalists who always had a good word for everyone. He was also a snappy dresser who became famous for his many jackets and hats, usually making the rest of his colleagues feel under-dressed.

Added John: “He was one of the nicest guys I ever met. I never saw him get cross with anyone, and he always gave his all to the job in hand.

“He was one of only five people who sent flowers to my wife, who he also knew at the Journal, and I when our son was born; we still have the card. Rest in peace my old friend.”

Former P&J colleague Peter Curtain added: “He loved journalism – a real pro. He was one of the nicest people I’ve ever worked with, a diligent journalist who was popular with and respected by his P&J colleagues.”

Walid declined a funeral and insisted instead on a simple cremation in New Jersey, where he had made his home with his wife, Vibe Clausen, and 10-year-old son Marwan.

He insisted that the song to be played as he was cremated was ‘I am Dust’ by Gary Numan. “He said he wanted to be cremated in New Jersey because it’s cheaper and ‘it was good enough for David Bowie’,” said Vibe.