A weekly newspaper journalist spent an evening as one of Father Christmas’s elves as he joined the man in red on a tour of his patch.

Bromsgrove Standard journalist Harry Leach volunteered to help out as Bromsgrove Round Table toured the Worcestershire town with Santa Claus on his annual sleigh ride.

Harry, who joined the Standard in May, carried a bucket to colelct cash for charity as Santa rode around on his sleigh, which was ably supported by a car towing it in front.

The money raised is used to help local families struggling financially during the festive season. 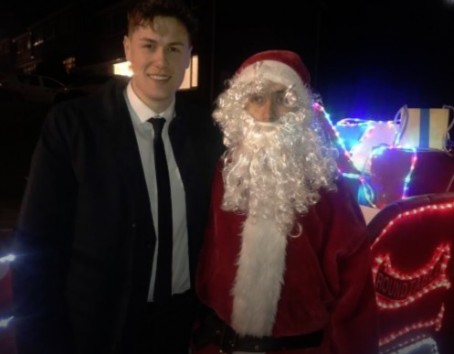 In a feature about his experience helping the Round Table, Harry wrote: “Chilling with Santa – and I mean that in every sense of the word – was not what I expected to be doing on a cold Wednesday evening.

“But I’d be lying if I said it wasn’t one of my career highlights.

“To see the amount of effort and planning that goes into just one of the Round Table’s nights out was a real eye-opener.”