The press watchdog has rapped a daily newspaper for erroneously reporting that statistics quoted in a report refered to Scotland – rather than the whole of the United Kingdom.

The Herald, Glasgow, had blamed an “editing error” for the mistake, which had prompted a complaint to the Independent Press Standards Organisation.

The Herald’s story, which was presented in the context of a new report released by Oxfam, stated that the gap between “the haves and have nots” in Scotland was growing.

It added that the new report revealed “that in Scotland, the richest one per cent has more wealth than the bottom 50 per cent combined”. 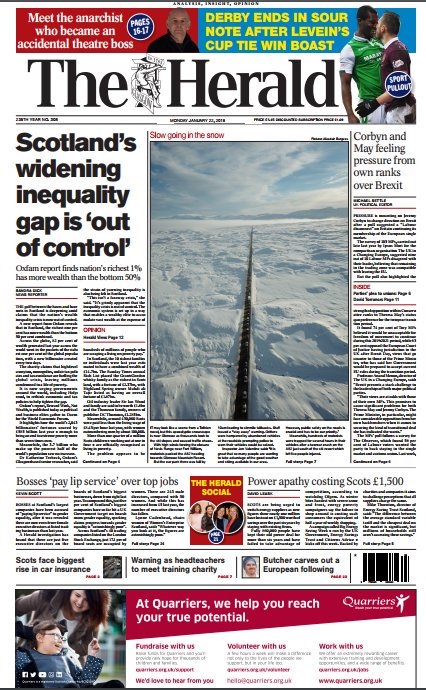 Complaining to IPSO about the story under Clause 1 (Accuracy) of the Editors’ Code of Practice, Lorna Dey said that the article gave the misleading impression that the new Oxfam report had referred to Scotland, and that this was the source for the article’s key claims.

The Herald denied a breach of the Code, although it accepted that, due to an editing error, one statistic had been misattributed in the article.

It said that the figures referred to in the sub-headline and the second paragraph were, in fact, from a 2015 Oxfam report, which the organisation had highlighted to media outlets when releasing the new report, and that an error in the editing process had misattributed them to the new report.

The newspaper offered to publish a clarification on page two apologising for the error, but the complainant said it should appear on the front page because the original story had.

IPSO found the article had distorted the contents of the report by suggesting it referred to Scotland, but found the offer of a clarification on page two was sufficiently prominent and should now be published.