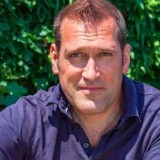 A former daily newspaper journalist who later went into regional TV has died aged 50 after a four-year battle with cancer.

Tributes have been paid to Martin Dowse, left, who worked on the Bournemouth Echo before making the move to television with ITV.

Martin’s career began at the Echo in its Wimborne and Christchurch offices in the early 1990s.

He went to ITV News Meridian in 1994, and became the programme’s Dorset reporter a few years later.

ITV News Meridian presenter Fred Dinenage said: “Martin was a pleasure to work with. A great man who showed feeling and passion in his job. I was honoured to work with him.”

Kim Hewitt, programme and digital editor, added: “Words cannot express how sad we all are at the loss of a fantastic colleague. Martin was a brave man.

“He never complained, even when he was struggling, and would continue to work through chemotherapy and more. I am proud to have known him.”

Martin, who grew up in Lincolnshire before going to university, lived in Bournemouth.

He is survived by wife Alison and sons Henry, 18, and 15-year-old Oliver, as well as their Labrador dog Rupert.

His funeral will be held today at Bournemouth Crematorium.