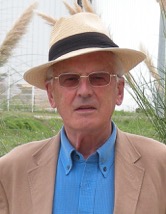 A former weekly editor who went on to become a prominent figure in the wider industry has died aged 84.

John Hardeman, left, was president of the Guild of Editors, the forerunner of the Society of Editors, in 1985 and also played a role in establishing journalism training in its early years.

Editor of the Solihull News for seven years, he went on to become editorial director of Reed Midland Newspapers, overseeing the Worcester News among other titles.

John died in Warwick Hospital last week after suffering a fall at his home in Leamington Spa.

Born in Rugby in 1933, John left school at 14 and persuaded the editor of the Rugby Advertiser to give him a job.

He remained in the town for a number of years, later as chief reporter of the Coventry Telegraph’s Rugby office.

His son Simon, who also became a journalist, said: “Contacts gave him the nickname ‘Scoop’.

“During this time he began his involvement in the civic life of the town, and sang in several choirs, including the Rugby Philharmonic Society.”

After editing the Solihull News he became managing editor of the West Midlands Group, which then included the Birmingham Post and Mail, and then editorial director of Berrows Newspapers, which became Reed Midland Newspapers.

As well as his role in the Guild of Editors he also served on the Press Council, the press regulatory body of the time, and spent two years working with the Newspaper Society in London.

In the journalism training sphere, he chaired the body responsible for the introduction and running of National Vocational Qualifications (NVQs) across the United Kingdom and Northern Ireland, and was chief external verifier of Journalism NVQs for the national awarding body.

He also ran training courses accredited by the National Council for the Training of Journalists (NCTJ), and was a consultant to other awarding bodies.

In his late 70s, during retirement, John gained a degree and then a masters in global history, from the University of Warwick.

He also continued to indulge his passion for theatre by continuing to write reviews and also founded a local magazine, Cotswold Diamond.

Suffering from failing eyesight, he suffered a fall at his home in Leamington that led to a rapid decline and he died in Warwick Hospital, with family around him.

John is survived by his children Simon, Sarah, Jonathan, Joanna, and Laure.