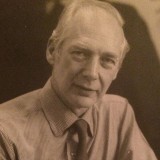 An editor who ran a weekly newspaper for almost a quarter of a century has died aged 89.

Norman Railton, left, edited the Ryedale Gazette & Herald from 1964 until his retirement in 1987.

During his tenure as editor he introduced a number of changes including weekend features, a junior section and a bigger sports section, and marked the Queen’s visit to the area in 1971 with a colour souvenir – a rarity at the time.

Norman, who died on 2 January, had previously served as deputy editor in the two years prior to his promotion.

Colleague Jack Childe once wrote of him: “What he doesn’t know about his subject isn’t worth knowing. Many are the young and older men privileged to have worked with him who have gone off into the world more sure of their craft.”

Born in Keighley in 1928, Norman began his career on the Lancashire Evening Post in 1944, returning to the paper in 1946 following his National Service.

He married his wife Joan, who he met at his tennis club in Preston, in 1953.

In 1957, he crossed back over the Pennines to work at the York Evening Press, moving to the Gazette & Herald three years later.

On his retirement, Norman wrote: “The local weekly – that regular audit of events, a unique presentation of an area’s successes and failures, foibles and changes that a day or two after its birth is cast aside by most readers without further thought, yet is cherished by a few as matchless, unrepeatable and historically-valuable social document. For 25 years it was my privilege to play some part in this remarkable achievement.”

Norman is survived by children John and Jane, grandsons Tom, Matthew and William, and great-grandsons Jacob, Sam and Freddie.