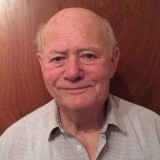 Tributes have been paid to Malcolm Scott, left, who edited titles including the Spalding Guardian, Bury Free Press, Newmarket Journal and Grantham Journal during his career.

He later served managing director of EMAP Anglia in the 1990s, before the company was bought by Johnston Press in 1996.

David Young, retired editor-in-chief of the Lynn News and Citizen, described Malcolm as someone who got “stuck into local issues” and was a “highly popular character”.

David told his old newspaper: “Malcolm was a very talented community newspaper man, a wonderful mentor of up-and-coming trainees, and the very best of colleagues.”

Iliffe Media board member David Fordham, who worked with Malcolm for Yorkshire Regional Newspapers in the 1980s, paid tribute to his “vast experience of the regional press” and his “calm and polite manner”.

He added: “Malcolm made numerous friends with many of the colleagues he worked with and I know that all will be extremely sad to learn of his passing.

“My last contact with Malcolm was little over two months ago, he was interested to know how many of the newspapers that he had previously worked on, that are now part of Iliffe Publishing, were performing and was delighted to learn that the papers were now receiving more investment than had been the case in recent years.

“He was a true local newspaper enthusiast and he will be sadly missed by all those who had the pleasure and privilege to work alongside him.”

Malcolm took early retirement because of cancer from which he made a remarkable recovery – surviving for a further 25 years.

He lived in Lincoln with his wife Bridget, but died suddenly at his holiday home in Hunstanton, Norfolk, on Saturday.

Funeral details are to be announced in due course.