A regional daily tracked down footballing heroes as it celebrated 10 years since a famous Cup win for its patch.

The News, Portsmouth, marked a decade since Portsmouth FC last won the FA Cup with a special 16-page supplement.

The News ran a special 16-page pull-out on Thursday to commemorate Portsmouth’s 2008 triumph.

Head of sport Mark McMahon told HTFP the anniversary coverage had been “one of the easiest and most rewarding assignments undertaken by the sports desk in recent seasons”. 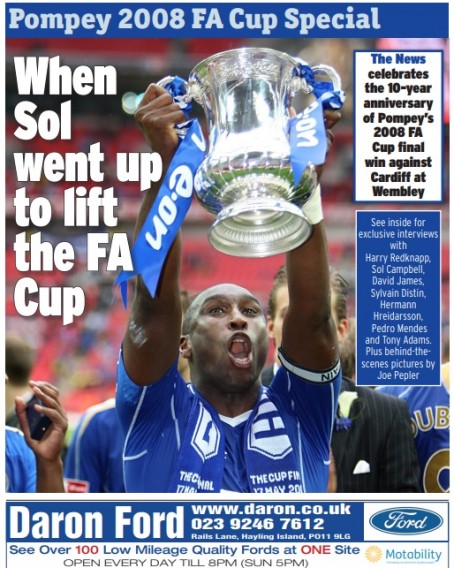 He said: “If anything, the hardest part was restricting our the supplement to a mere 16 pages. When thoughts first turned to a commemorative publication, a difficulty in tracking down the main protagonists was anticipated.

“To be fair, those initial concerns had their foundations, with little or no headway made early on. However, dedication to the cause paid off, with an extensive range of exclusive interviews with players in particular who had said little or nothing about the magnitude of their achievement since the day they left Pompey.

“Unfortunately, Blues goal-hero, Kanu, proved elusive – despite several conversations and agreements that he’d happily take part. Yet, the likes of Sol Campbell, Pedro Mendes, David James, Hermann Hreidarsson and Sylvain Distin were all tracked down – and all provided some rare insights and golden anecdotes that will go down well with the readers.”

Mark added: “So all of a sudden, a one-time picture-inspired supplement is now bursting at the seams with some great stories and reflections from the main men themselves – all accompanied, of course, by some fantastic images from the day, and some never-seen-before snaps taken behind the scenes by then-club photographer Joe Pepler.

“In the end it’s a pity we had to stick to the 16 pages. But hopefully the readers will have recognised the extra lengths we have taken to mark the occasion.

“All week long we’ve had extra stories – not just on the Cup run but other key events surrounding these players’ and the manager’s time at Fratton Park – occupying the usual daily spread dedicated to Pompey. The website has also been taken over by those famous figures from the past, ensuring comprehensive coverage of a magical moment in Pompey’s history.

“It’s taken a lot of time and effort to put the supplement together, with words supplied mostly by Neil Allen and Jordan Cross. Hopefully, though, the final product will do Pompey’s FA Cup achievement justice.”