A regional daily is set to hold a special concert as part of its bid to reduce knife crime among young people in the city it serves.

The Hull Daily Mail is also visiting every secondary school in two weeks as part of its campaign, which is being run in conjunction with Humberside Police, radio station Viking FM and the sister of a knife crime victim.

The #NoMoreKnives campaign tour will begin on Monday, and culminate with a concert at the city’s new Bonus Arena on 5 October – with bands playing and the families of knife crime victims also taking to the stage to share their experiences.

The Mail launched its campaign in April with Kayleigh Pepper, who brother Rich was stabbed to death outside his home in Hull at the age of just 25. 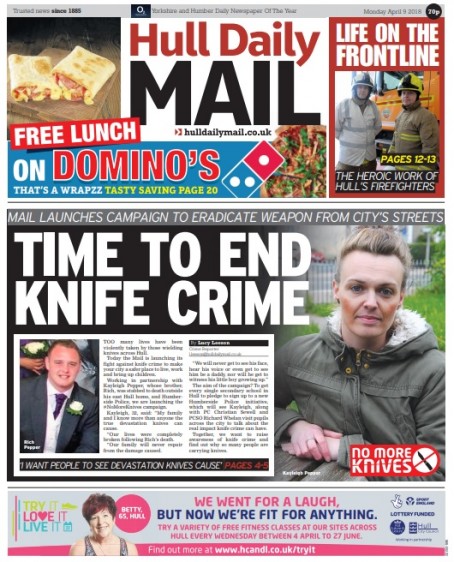 How the Mail launched its campaign

Mail crime reporter Lucy Leeson told HTFP: “It is a privilege to be a part of Hull’s innovative #NoMoreKnives campaign.

“I was first met Kayleigh and the rest of their family at the most horrendous time in their lives. I witnessed first hand the turmoil and devastation they went through losing someone so close to them through knife crime.

“I am so pleased to be working alongside her and Humberside Police to educate children on the dangers of carrying a knife. The idea is that we challenge the perception that carrying a knife is normal.

“This campaign has so many different elements to it and will be something the children can really engage with. The Hull Daily Mail is at the heart of our community and we can use our platform to share such vital messages to the community.”

Last week Sheffield daily The Star produced a special edition on the subject of knife crime, with 1,500 copies being given out for free to schoolchildren across the city in a bid to address the issue.