A rebranded regional daily website has been launched with a pledge to “better represent communities” in and around its patch.

The Birmingham Mail’s site is now running under the Birmingham Live banner, following a restructure which has seen the newspaper’s digital team made independent from its print team.

The move has also seen staff relocate from their previous Fort Dunlop base to Embassy House, in Birmingham’s Colmore Business District.

The website has been launched with the slogan ‘Big on Brum’, and the colour purple features prominently in its design. 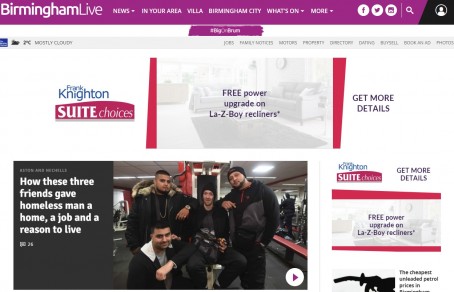 In celebration of the launch, the Library of Birmingham will light up in purple at sunset this evening.

Marc Reeves, editor in chief of Trinity Mirror Midlands, said: “Our audience told us they wanted a website that feels vibrant and inspirational, one that they can visit each day to see what’s happening right now, and to keep them up to date with the very latest from this great city and its people.

“We’ll cover all that Birmingham’s talking about every day, and there’ll be so much more than just news. The latest developments, ways to avoid traffic jams or to ease your travel woes, the football team news and chatter, the very newest restaurant openings and guides plus the very best things to do in this amazing city.

“From bid wins and bin strikes to tax credits and finding the best local discounts, we’ll ensure you can make your hard earned money go further.

“We’re big on Brum. We love where we live and Birmingham Live knows what makes this city tick. We’ll celebrate what’s great, call out what’s not, and embrace the new – continuing our very proud traditions in campaigning and championing to make the city better. Birmingham and its people have incredible stories to tell – and we’ll tell then better than anyone.”

Trinity Mirror previously said there would be a “small net reduction in the number of newsroom roles” as a result of the changes in Birmingham.

Although rebranded as Birmingham Live, the site retains the original URL www.birminghammail.co.uk.

When plans for its launch were announced, Birmingham Live was accused of “muscling in” on an independent entertainments website of the same name, whose owners accused the Mail of “trying to steal our name”.

The independent site is run under the name Birmingham Live! and Twitter handle @birminghamlive, although the site operates under the domain name www.brumlive.com.