A regional daily and national charity joined forces for a major investigation into poverty on its patch.

The Northern Echo worked with Church Action on Poverty to look at the causes of poverty, its human impact and new projects in the North-East of England trying to address the issues.

The Echo and the charity used the Freedom of Information Act to reveal the postcode lottery of council-run crisis funds, and gathered first-hand accounts from people with personal experience of poverty to illustrate the impact of the problems.

The work was supported by exclusive statistics from the Joseph Rowntree Foundation, broken down to local levels within the North East. 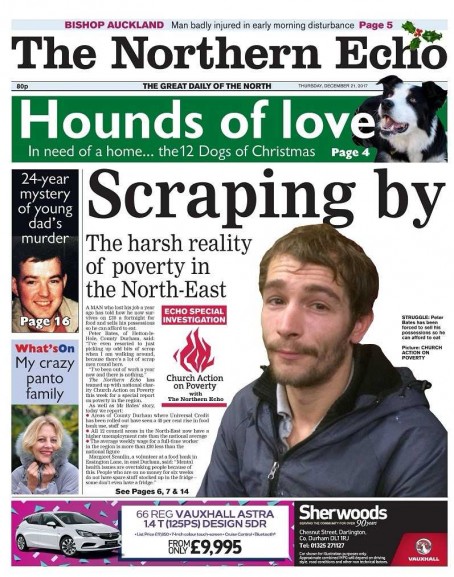 The findings were reported over two days just before Christmas, including the splash and three inside pages each day.

Interviewees for the project were carried out over several months by Gavin Aitchison, former reporter and news editor at York daily The Press, who joined Church Action on Poverty last spring.

He said: “People with first-hand experience of poverty are too often under-represented in the media, but it’s important that we truly listen to them, rather than allow people to be merely talked about.

“Very few media outlets have the resources they would like, but this project allowed us to really listen to people over time, to understand the underlying causes of poverty, the human impact, and the new approaches to tackling it at a local level, and then to share those stories.”

Hannah Chapman, deputy editor and head of content at The Northern Echo, added: “When Church Action on Poverty approached The Northern Echo to work with them on this, we knew straight away it was something we wanted to get involved in.

“There are shocking levels of poverty in the North-East, and one mum left with no income for eight months when her benefits were stopped told how conditions in her community are worse now than during the Miners’ Strike.

“In another piece, a man made redundant a year ago described how he sells fly-tipped scrap to put food on his table. Their stories have to be told if anything is to change.”

Church Action on Poverty is looking to carry out similar work with other regional media later this year.