Two sister dailies have moved back to city centre offices after an absence of nearly half a century.

Aberdeen dailies the Evening Express and the Press & Journal, collectively known as Aberdeen Journals, have moved in to new headquarters at Marischal Square, a stone’s throw from the Broad Street site where they were produced from 1894 to 1970.

For the last 48 years the titles had been based at Lang Stracht, almost three miles away on the outskirts of the city.

In addition to the city centre return, owner DC Thomson has also annoucned a new Aberdeen Journals shop will be opening on nearby Upperkirkgate for readers to place notices, pay for ads, buy merchandise and book holidays. 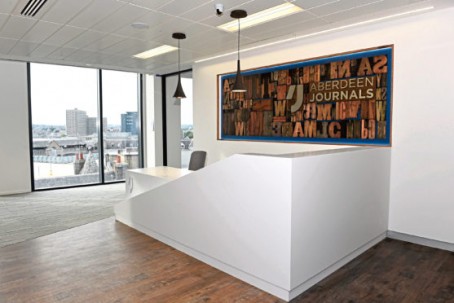 More than 200 Journals staff will be based at the top floor of the Marischal Square development.

The offices have been fitted out in what has been described in the Evening Express as”sleek contemporary style” with “quirky” touches such as meeting booths fitted out as train carriages.

Mike Watson, chief executive Officer of DC Thomson Media, said: “We’re thrilled to be moving the Aberdeen team into state-of-the-art office space in the heart of the city.

“This move will provide the teams with a brilliant environment to work in, just a stone’s throw from the old Aberdeen Journals office on Broad Street. Our investment in this space cements our commitment to Aberdeen and the papers that serve the city.”

Alan McCabe, editor-in-chief at DC Thomson evening newspapers, said: “We’re delighted to be producing the Evening Express and The Press and Journal from our fantastic new home in the heart of Aberdeen.

“Virtually everyone who has set foot in the new office has been bowled over and that’s down to the vision and hard work of[architect] Fiona Adam and her team at Covell Matthews and the fit-out team at Transform who’ve done an outstanding job, designing and creating such an amazing space for us.

“We wanted somewhere that would inspire our teams and reflect the way Aberdeen Journals has changed from a traditional publisher to a modern, multimedia company – and we couldn’t be happier with the end result.”

Other companies which have already moved into the building include Mackie’s, Costa, All Bar One, Marriott International, Tony Macaroni and Prezzo.

Project architect Fiona Adam said: “The long history of the Journals in the north-east afforded us excellent design opportunities to include local references within the artwork timeline of Fittie, Dunnottar and Balmoral Castles and footballing legend Willie Miller.

“Covell Matthews Architects have been delighted to have been involved in the delivery of the new office for Aberdeen Journals. It has been a hugely enjoyable and fun project working with such a terrific client, contractor and design team.”